A C Media Group, founded in August 1994 in Melbourne, is committed in promoting communication and development between China and Australia in areas of economy, trade, culture, tourism and foreign affairs.

The Chinese Weekly and its inserted newsapers The Bilingual 1st Chinese Newspaper, The Chinese Commercial Weekly, Modern Life Weekly, Property Weekly and New Migrants is distributed throughout Melbourne including Box Hill, Glen Waverley, China Town and so on.

Through its many outlets, The Chinese Weekly has enabled the local Chinese community to communicate with mainstream society.

A C Media Group has organized cooperative events with the Chinese government, corporations and major media organisations. It also has expertise in exporting Australian products to China, which has had a significant influence in promoting cultural exchange and trade between China and Australia. 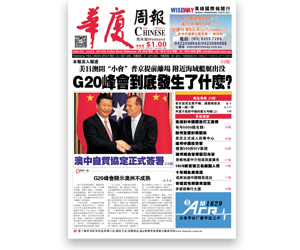 Established in 1986, the Chinese Newspaper Group is the only privately owned and operated... read more

Catering mainly for the needs of the Greek - Australian woman, Ellinis, the weekly magazine has... read more

NOVOSTI is published from Monday to Saturday. It is the oldest and most respected Serbian... read more

Sing Tao News Corporation Limited is a media corporation with a vision to... read more

Ta Nea is a weekly Greek newspaper distributed throughout Victoria.

In 2015, The Australian Jewish News will celebrate its 120 year anniversary, making it Australia... read more

A C Media Group, founded in August 1994 in Melbourne, is committed in promoting communication... read more

Established in November 1926, it is the only Greek national daily newspaper in Australia.... read more

Published every Wednesday and Friday, The Spanish Herald it is a national journal representing a... read more

Ukrstenica or Crossword - the world’s best-selling Crossword in the Serbian language.